Do you love to sing, act or dance?

With 90 years of successful shows under our belt, New Rosemere is the place to be!

Award winning productions, a welcoming cast, and a lively atmosphere. What more could you want from your local theatre group?

Based in Bolton, Lancashire, we are always looking for new members and would love to hear from you. Whether you’d like to perform centre-stage, or prefer to operate behind-the-scenes, you will find a warm welcome at New Rosemere.

Unlike some societies, our cast don’t subsidise the cost of our shows, so our ‘subs’ are some of the cheapest in Bolton. Subs are currently £45 for the year; discount available for students.

We perform annually at Walmsley Theatre and rehearse on Monday (and some Wednesday) evenings at Deane Church, Bolton, from 7.30pm (September – March). Being a social bunch, we hold additional events and concerts for our members throughout the year.

Want to find out more? Go to our Contact us page and get in touch for more information.

Officers of the Society

One for the historians 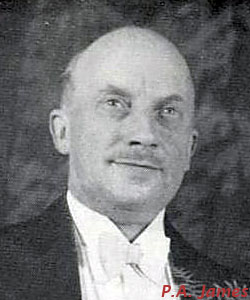 Hopefully, by now, you’ve read all about what we do at Rosemere… but where did we come from? Let’s go back in time and see where it all began!

On Chorley Old Road, Bolton, there sits a pleasant detached property facing Delph Hill Church to the front and with a rear aspect overlooking Doffcocker Lodge.

Built in 1913 for Mr. R. C. Whitfield as a home for his new bride, Effie, the house provided a happy home for the couple in the early years of their marriage.

To this house in the year 1927 came a young Customs and Excise Officer (a native of the City of Bath). He stayed with the Whitfields whilst stationed at a local office of His Majesties Customs and Excise. His name was Mr. P.A. James, known to his friends as ‘Pern’, and he brought with him to Bolton a fascination for amateur operatics and, in particular, a love for the works of Gilbert & Sullivan.

This love of music was shared by the Whitfields, who were active members of Bolton Choral Union at that time. They were happy to share Pern’s enthusiasm and determined together to form an amateur society devoted to the works of Gilbert & Sullivan.

They accordingly became joint founders of the new society, gathered together a group of musical friends at Albert Place School, which stood at the junction of Chorley Old Road and Chorley New Road.

The first production was ‘Trial By Jury’ and it was a great success. They soon had to move to larger premises and Bolton Lads’ Club on Bark St. became their new home with a production of 'The Pirates of Penzance‘.

The Society remained at Bark St. for 15 years, until 1943, when they transferred their productions to the vastly superior facilities of St. Pauls Parochial Hall in Astley Bridge.

In more recent years, the Society has performed at Walmsley Parochial Hall (1984 & 1985) and, from 1986, at the Albert Hall (within the Victorian Town Hall building). Since the Albert Hall’s refurbishment, we have found a new home at Walmsley Theatre, where we continue to perform our annual productions. Members are now based at Deane United Reformed Church Hall, 385 Wigan Road for rehearsals.

And from where did the Society receive the title ‘Rosemere’? Well, the Whitfield residence originally carried the name Rosemere.