New Rosemere Has a New Chairman...

... and she's the youngest Chairman the society has ever had.

Hannah Carolan (nee Gent) took over the helm of New Rosemere at the AGM in June. Despite being only 26, Hannah has been a member of New Rosemere for years; in fact, as well as becoming Chairman at the AGM, Hannah was also presented with her 10-year long-service award by President, Bernard Killeen. 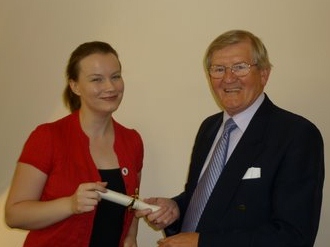 "I always wanted to be in Rosemere - in fact I can't remember not being around the society. My Dad, Stephen, became a member in the '60's and my sister, Elizabeth, in the '80's - it was then pretty much inevitable that I would join in too.

As a child, I would go along to some rehearsals and the Dress Rehearsals each year and be mesmerised by whatever it was I was watching; I vividly remember watching Ruddigore and being amazed by the moving pictures.

I got involved in Rosemere as soon as I could, I started off selling programmes during show weeks and then I became a cast member in 2000. My first show was 'The Sorceror' in March 2001 - I'll never forget that feeling I felt each night as the curtains opened, it was sheer joy.

It was with great pride that I took over as Chairman in June; to be leading the society that I grew up in is quite an honour as well as a responsibility.

Rosemere means a lot to me (in fact the society's name is probably written through me like a stick of rock!) so I am keen to see it prosper and grow. We are always looking for new members to add to our cast and crew, so if you fancy doing something new why not pop along to a rehearsal and come and see for yourself what we're all about."