In March New Rosemere AOS will be presenting their 100th show!!!

New Rosemere have been producing top quality shows for many years and normally the selection of next years production is the cause of some debate in pondering how to celebrate the Society's 100th show however, the committee members consulted their list of the 99 shows produced since the society was founded in 1927 and saw that the first ever Rosemere show was "Trial by Jury". Since that date the show has been presented no fewer than nine times, on all but one occasion as a double bill with "HMS Pinafore". Problem solved.

The Society's archives contain an original programme for "Trial by Jury" (price one penny) typed on a foolscap sheet and bearing the date Saturday Febuary 28th 1927. The "Learned Judge" was played by Robert C. Whitfield, a founder member, who was later to become President and Life member of the society. Lower down the bill comes "The Usher" played by Mr P. A. (Pern) Jameswho was Producer and Musical Director for for all of Rosemere's first 67 shows! The show was produced as part of a concert at Albert Place Schoolroom in Bolton and also featured a sketch entitled the "The Head Waiter" by J. B. Trenwith (Shades of Basil Fawlty) and an "Eastern Song Scene of Love Lyrics".... the mind boggles!

There seems no doubt however that the forthcoming production will be thorougly up to date with whilst retaining the best of Gilbert's humour and Sullivans wonderful music. One of NRAOS's younger members, Hannah Carolan, who has previously appeared in the chorus and as a principal in previous NRAOS shows, will be spreading her talented wings in the role of producer in "Trial", while a guest Producer has been appointed for "Pinafore". His name is John Cocoran. Not only is John well experienced in matters G&S, in production, music and performance but he bears the same name as Gilbert's "Captain of the Pinafore" and G&S afficianado's are predicting that he will be "a right good producer too!"

Rehearsals are proceeding apace under Musical Director Elaine Lowe, who was in charge of last years triumphant production of Utopia Ltd" and wth Rosemere's established performers and some new stars, backed with the usual splendid Rosemere Orchestra, an enjoyable evening seems guaranteed. 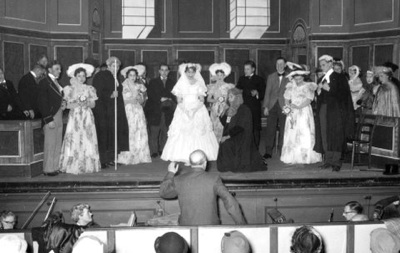 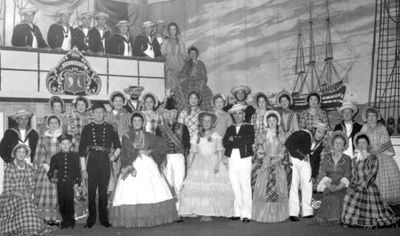 These photos are from the Society's archives and show the 1957 production of the two one act operas.