The Yeomen of the Guard

To order tickets, click below and select the date/time of the performance you would like to see. 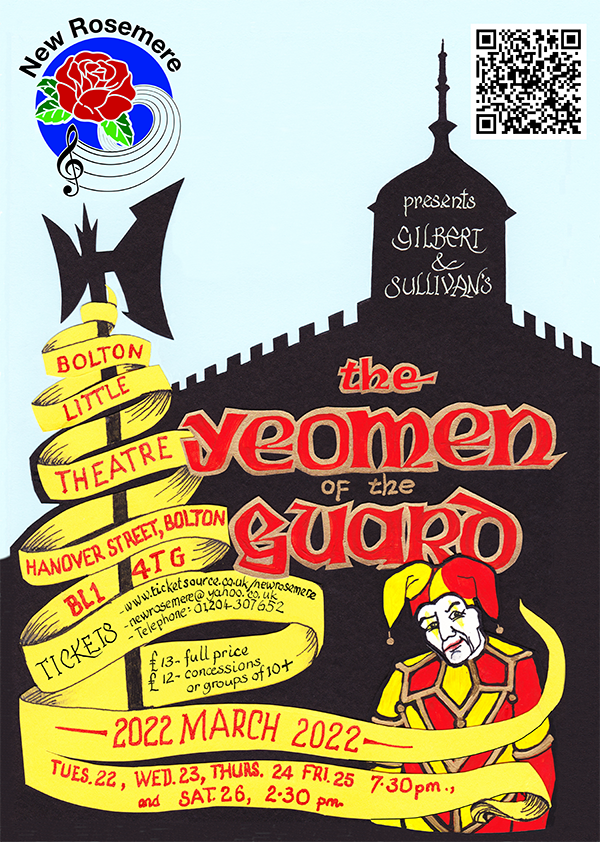 The Yeoman of the Guard - Synopsis

Colonel Fairfax is to be executed today on Tower Green; a relative has falsely accused him of sorcery in order to inherit the estate which diverts to him if Fairfax dies unmarried. Pheobe Meryll is in love with Fairfax, much to the disgust of the Head Jailor and Assistant Tormentor, Wilfred Shadbolt, who imagines himself engaged to her.

Sgt Meryll’s son, Leonard, is soon to arrive to join the Tower Warders, and his father hopes he will bring with him a royal pardon for Fairfax, whom he admires. When Leonard arrives without the hoped-for pardon, the three Merylls concoct a plan… Unaware of this, Fairfax asks the Lieutenant to find him a wife so that his relative will not inherit his estate. In return for an hour’s marriage the widow will inherit Fairfax’s name and one hundred crowns.

A boisterous crowd enters pursuing two strolling players, Jack Point and Elsie Maynard, who are forced to entertain them. The Lieutenant arrives just in time to rescue the players from the crowd, and he asks Elsie if she would marry for an hour. Elsie is persuaded by the fact that she needs the money for her poor mother, Point (who hopes to marry Elsie himself) is reassured that the bridegroom will be dead within the hour, so he too agrees. Elsie is blindfolded and led away to her wedding.

Pheobe uses her feminine wiles to steal the cell keys from Shadbolt and Fairfax is released and disguised. Sgt Meryll presents his son ‘Leonard’ to the Yeomen who welcome him. Phoebe welcomes her ‘brother’ too, although far more lingeringly and ecstatically than might be considered natural. The crowd assembles for the execution; Fairfax (as Leonard) and two other Yeomen are ordered to fetch the prisoner, but are back in a moment: the prisoner has escaped! Point despairs at the news, whilst Elsie realises that her bridegroom is still alive and she faints in the arms of ‘Leonard’.

The Yeomen continue their search for the escaped prisoner while Dame Carruthers and the crowd taunt them for their failure. Point concocts a plan to save Elsie from her marriage, he and Shadbolt will pretend they saw Fairfax trying to escape and shot him as he dived into the river. With Fairfax supposed dead, Elsie would be free to marry Point and, in return, he would teach Shadbolt how to become a jester.

Meanwhile Fairfax has learned the identity of his bride and resolves to woo her to test her fidelity. A shot from the tower sets everyone agog and an excited crowd quickly gathers. Wilfred and Point tell the assembled crowd their cock-and-bull story.

Point proposes to Elsie, but Fairfax, Pheobe and Elsie try to teach Point how to woo her first. However it is Fairfax who successfully woos Elsie and carries her off, leaving Point and Pheobe in despair. Wilfred learns the truth of Fairfax’s escape from Pheobe, and the price of his silence is Pheobe’s hand in marriage. Dame Carruthers overhears and uses it to her advantage to snare Sgt Meryll, who she has long pursued.

Elsie, Pheobe and Dame Carruthers prepare for their weddings; Elsie is dismayed to discover that Fairfax’s reprieve has arrived and he comes to claim his bride. Fairfax reveals himself as the ‘Leonard’ she loves and all join in the ensuing gaiety.

All except Jack Point…